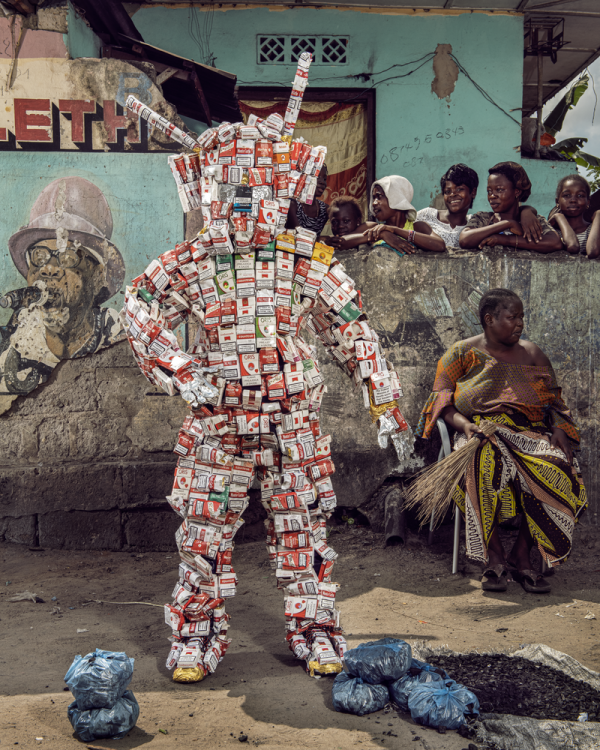 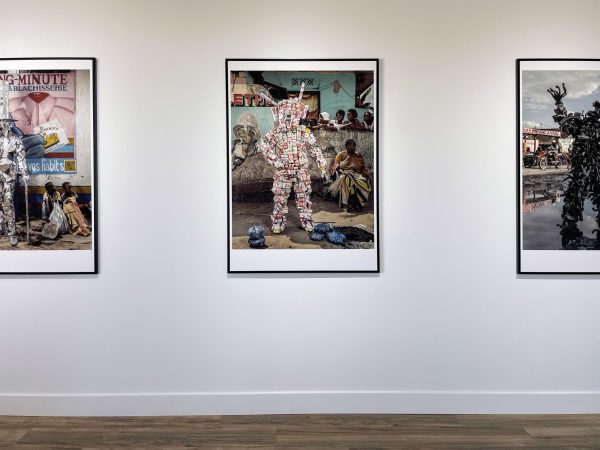 The Joshua Tree Gallery of Contemporary Art’s (JT-GOCA) new exhibition, Through Their Eyes, is a solo exhibition featuring the extraordinary photographic art of Stephan Gladieu—and it’s literally helping to support a collective of about thirty Congolese artists whose goal includes bringing awareness to the global exploitation of the Democratic Republic of the Congo (DRC). Gladieu’s vibrant portrait series, Homo Detritus (trash human) captures the members of the art collective, “Ndaku, ya la vie est belles” as they don intricate costume masks created from the western-world garbage polluting the streets of their capitol city, Kinshasa, Gladieu photographed the artists in their costumes in symbolic areas throughout the streets of Kinshasa to create this vivid series.

Harnessing the direct and unadulterated essence of photographic art, Through Their Eyes acutely elevates awareness of the ongoing exploitation of the DRC and its native people.  Laboring in abysmal conditions and for some of the lowest wages in the world, primarily courtesy of large multi-national corporations, residents of Kinshasa mine the rare minerals necessary for much of Asia’s and western countries’ consumer production.  The result is a despoiling of the country’s wealth—both human labor and natural resources.  Intensifying this exploitation, ironically, is the in vogue focus on climate change, as dominant corporations and wealthy countries rush to acquire the rare and valuable natural resources necessary to build the electric vehicles so prominent in many national environmental discussions.  The exploitation continues full cycle as consumer waste resulting from the resultant consumer products returns to Kinshasa on barges of garbage that dump millions of tons of waste back into the DRC, furthering the environmental and human disaster.  The exhibition curates the artwork to indelibly highlight this human and eco crisis so that the artwork creates a public awareness and opens a significant solution-minded discussion.