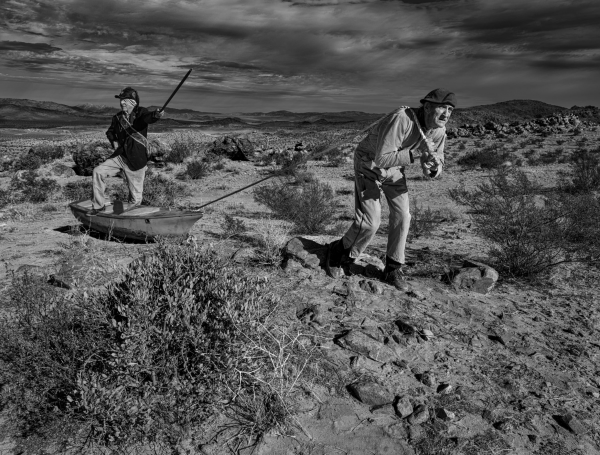 OUR SERMON WITH OURSELVES | DRYWALL DAVE

This body of work chronicles the life of David Kilburn, a regular man with a skill-set in drywalling. He moved out to Joshua Tree, California, from Buffalo in the mid-seventies.

The theatrical approach in creating these images mirrors the emotional aspects that changed David‘s life. First, his son Aaron died tragically in a car accident; later, his wife Amy of thirty-eight years died from cancer. While Amy lay frail on her death bed, she uttered, “Metamorphosis. Transform from a caterpillar, become a butterfly.” But, Dave lost his path after the love of his life passed. Unfortunately, Dave also had diabetes, and gangrene had set in on his feet. The clinic told him they would need to amputate his toes, to which he responded, “I‘m dying with my toes on.”

Dave then set out on a new journey. He went out and purchased a white blazer and a variety of butterfly pins and immediately attached them to the blazer. He changed his diet, cut out all forms of sugar, found a healer, got rid of the gangrene, dyed his hair blue and transformed into a colorful butterfly. Dave often dresses in his butterfly jacket as a homage to his wife, Amy.

Dave‘s words: “All the happenings in my life dwell in my psyche; they live in the chambers of my mind. This is what I‘m made of. This is my wealth for better or for worse. Nothing in life is ever standing still. New rules are being formed that may challenge our ideology. When challenged, we never know the degree of accumulation of emotion that will trigger a reaction that can change how we are perceived in that fleeting moment in time. Who is the receiver of our response or reaction navigating through at that time? How can we attempt to be mindful of our inner thoughts when we are saturated in the now?”

Dave and I collaborated to create this visual diary, discussing his life and clawing out each nagging voice or fleeting thought, following these strands through the tangle of his memory until they began to form a picture of their own accord. As the library of these images built up, each chapter spawned the next, lubricating the natural flow of introspection. Leafing forward, these staccato fragments of time will force open a window into Dave‘s inner conflicts and his constant questioning of self. All this, measured in degrees triggered by the personal accumulation of his journey through life, merged into common emotions that reflect guilt, sadness, regret, anger, remorse, forgiveness, embarrassment and joy, conflicts that are common enough for us to see our reflection in them. — Gordon Clark

Born in Johannesburg, Gordon Clark (b.1955) is an acclaimed photographer and commercial director renowned for his spellbinding images of the African landscape and people. His photographs have been shown in several prominent museum and gallery exhibitions around the world.

Gordon Clark photographs those rare individuals within society who challenge our inherent beliefs and jar our aesthetic aspirations. He weaves complex narratives by inserting subjects into deliberately choreographed natural environments, which compel viewers to interpret the powerful dilemmas at play within each subject’s life.

The artist had solo shows in numbers locations around the globe including Germany, The Netherlands, South Africa and the United States.