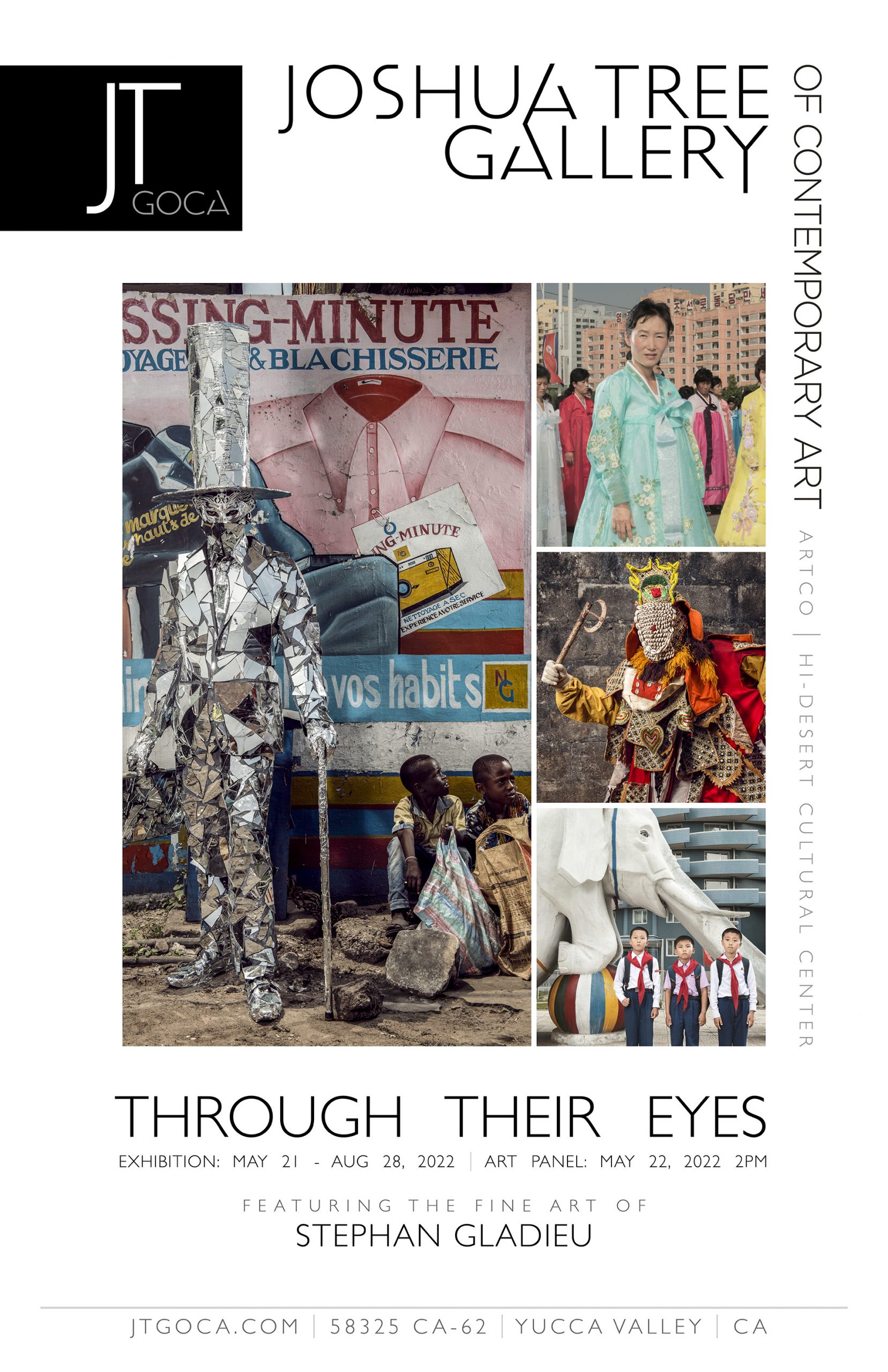 CALIFORNIA, UNITED STATES — The state-of-the-art Joshua Tree Gallery of Contemporary Art’s (JT-GOCA) newest exhibition, THROUGH THEIR EYES, will open with a free public reception on Saturday, May 21, 2022 from 6-9pm and runs through August 28, 2022.  The thought-provoking and illuminative exhibition features the iconic humanistic portraits by international award-winning French photographer, Stephan Gladieu.  An artist panel exploring photographic art as a tool to make socially relevant and evocative commentary will be held the following afternoon, Sunday, May 22nd at 2pm.  The panel will feature Gladieu, Museum of Photographic Arts President, John Mullen, acclaimed photographer and cinematographer, Gordon Clark, and ARTCO International’s Gallerist, Simon Melchers.

In his extensive series of works, Gladieu’s social documentary photography addresses cultural, social, and political narratives of the present time.  Whether in Afghanistan, Namibia, Benin, Congo, or North Korea—and as diverse as the geographic locations and social characteristics of his subjects are—epochal and distinctive is the way Gladieu captures and visualizes global issues.  Illustrative of Gladieu’s attraction to substantial facets of human coexistence, THROUGH THEIR EYES presents three of Gladieu’s most extensive recent projects.

Central within Gladieu’s oeuvre is his award-winning portrait series, NORTH KOREA, for which he traveled to the dictatorially-governed country that is predominantly sealed off from the rest of the world, in order to engage intensively with the state—but even more so with its population.  His portraits, seemingly almost staged and unreal, comment impressively and yet rather humorously on the country shaped by state propaganda and the government’s image of self as projected to the world.

Similarly, Gladieu’s EGUNGUN series provides insights into another closed-off society.  In 2018, Gladieu traveled to Benin, West Africa, into the land of the Yoruba where he photographed the mystical rituals of the EGUN and their ghostly ritual masks.

The EGUN is a figure that can move between the world of the living and the world of the dead and appears after the death, or in some cases the birth, of a member of the tribe.  In long ceremonies, food, drink, and money are sacrificed to the EGUN, who includes these items in his ritual.  It is strictly forbidden to communicate directly with the EGUN or even to touch him.

The EGUN also satirically underpin Gladieu’s third body of work, HOMO DETRITUS.  Through its vivid and thought-provoking symbolism, the artworks seek to bring to light the far-reaching impacts of the global waste issue.  Millions of tons of Western World waste are sent to vast landfills in the middle of Kinshasa, the capital of the central African country of Congo.  Ironically, a large part of the waste flows from the Western World’s consumption of products produced in Asian countries from Congolese mineral resources.  Effectively, Congo is exploited twice in the process.

In order to draw attention to this waste-based pollution of Congo’s land, Gladieu accompanied Eddy Ekete and 25 other artists who created “Ndaku, ya la vie est belle”—an artist collective named in reference to the ancestral EGUN in Kinshasa.  The collective took on this subject in an impressive way by creating a series of abstractions of EGUN costuming from the foreign waste products littering Kinshasa.  Gladieu photographed the artists in their costumes in symbolic areas throughout the streets of Kinshasa to create this vivid series.

Considered one of the finest exhibition spaces in California, the cutting-edge Joshua Tree Gallery of Contemporary Art is located in the Hi-Desert Cultural Center’s new and expansive Yucca Valley Visual & Performing Arts Center.  This new art complex is located at 58325 Highway 62, Yucca Valley—two minutes away from the Cultural Center’s main facilities in downtown Joshua Tree.  The gallery’s scheduled hours and days of operation, art panels, and other special events will be updated on its website, www.jtgoca.com. Private showings available by appointment.  JT-GOCA is an innovative partnership between multi-national art gallery, ARTCO, and Hi-Desert Cultural Center, the regional arts organization for the communities of Joshua Tree National Park.

No comments to show.